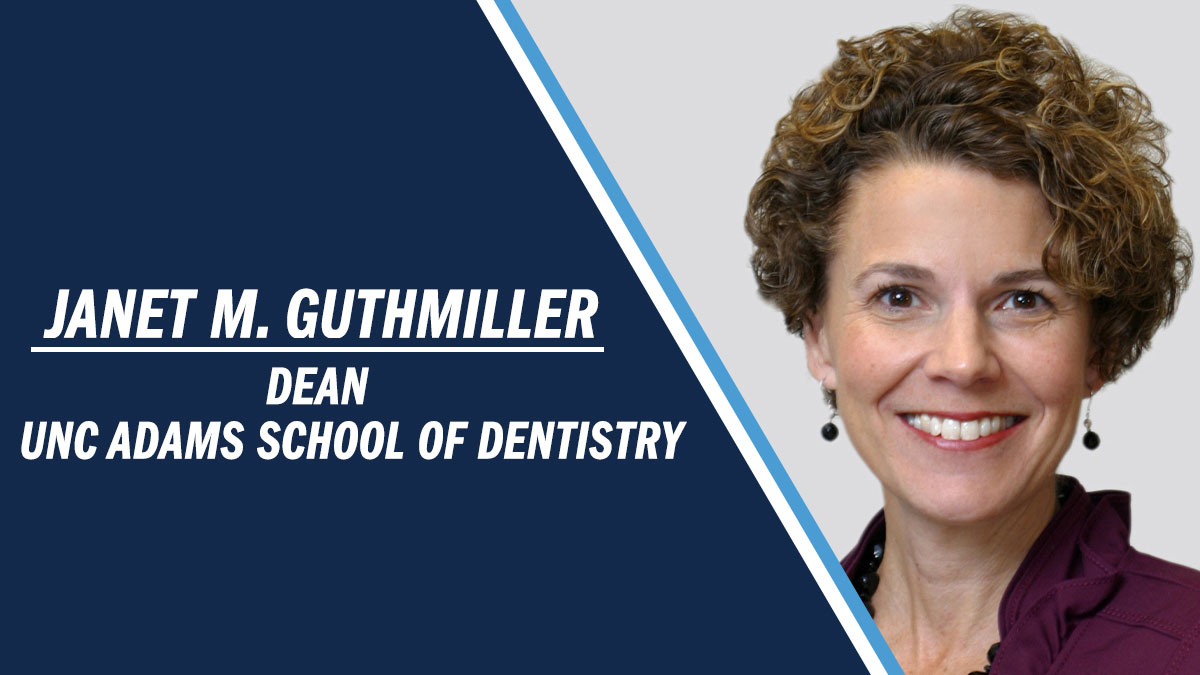 After eight years as dean in Nebraska, the accomplished administrator will begin her new role as dean of the highly ranked Adams School of Dentistry on Oct. 15.

Dr. Janet Guthmiller, dean of the College of Dentistry at the University of Nebraska Medical Center, has been named dean of the Adams School of Dentistry, Chancellor Kevin M. Guskiewicz and Provost and Chief Academic Officer J. Christopher Clemens announced in a campus message May 11.

A highly accomplished leader, Guthmiller returns to Carolina’s dental school after eight years in Nebraska and begins her new role at Carolina on Oct. 15. She will also hold the Claude A. Adams Distinguished Professorship.

In her current position, Guthmiller leads dental programs that serve over 300 students on five campuses across 500 miles. Under her leadership, the College of Dentistry launched two new educational programs to meet the needs of today’s students and built and renovated numerous facilities to foster cutting-edge teaching and learning and delivery of patient care. A strong advocate for public service, Guthmiller serves as the principal investigator on a $4 million contract from the State of Nebraska to increase oral health services to underserved citizens of Nebraska and encourage graduates to practice in underserved rural areas.

Guthmiller is a nationally recognized leader in dental education and an accomplished researcher, author and teacher, the message continued. She has been the recipient of collegiate, university and national teaching and mentoring awards, including the Faculty Mentor of the Year from the National Student Research Group of the American Association for Dental Research in 2007. Guthmiller’s NIDCR funded research has encompassed molecular biological studies of periodontal pathogens and expression and function of innate antimicrobials. She has published numerous manuscripts and abstracts, two books and several book chapters. Guthmiller is a diplomate of the American Board of Periodontology and fellow of the American College of Dentists and the International College of Dentists.

Guthmiller is active in many professional organizations, most recently serving as the president of the Supreme Chapter of Omicron Kappa Upsilon, a national dental honor society, and she is currently chair-elect of the administrative board of the American Dental Education Association Council of Deans. She is the recipient of the Distinguished Alumni Award for Professional Achievement from Northwestern College, the Distinguished Alumnus Award from the Cellular and Structural Biology program at the University of Texas Health Science Center in San Antonio and an Honorary Life Membership Award (2016) and Distinguished Service Award in 2021 from the UNMC College of Dentistry Alumni Association.

As dean of the Adams School, Guthmiller will continue to champion its profound commitment to public service and academic and research excellence. For 70 years, the school has provided quality care to patients across North Carolina. About half of dental professionals in the state are Carolina graduates, serving 96 out of 100 counties. Adams is recognized as the No. 2 dental school in the world by Shanghai rankings and has raised more than $90 million in the Campaign for Carolina to propel its future.

“We are confident that Janet’s knowledge of Carolina, eight years of experience as a dean and strong leadership will keep the Adams School on its trajectory as one of the nation’s leading schools of dentistry,” Guskiewicz and Clemens wrote.

“It is an honor to return to the University of North Carolina, and I am excited to partner with the amazing faculty, staff, students, alumni and the Carolina community in advancing the legacy of the Adams School of Dentistry and fulfilling the mission of the school, including service to the citizens of North Carolina,” Guthmiller said. “My family and I look forward to rekindling our friendships and calling Carolina ‘home,’ once again.”

In the message, the chancellor and provost thanked the search committee and its chair, Beth Mayer-Davis, Cary C. Boshamer Distinguished Professor of Nutrition and Medicine; chair, department of nutrition; and director, UNC Nutrition Obesity Research Center.

“We are also grateful to interim dean Ed Swift for his continued leadership of the Adams School until Janet arrives this fall,” they wrote. “For now, please join us in congratulating Janet and welcoming her back to Carolina.”