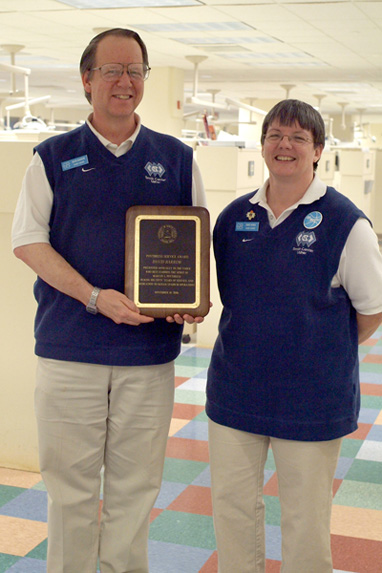 The UNC-Chapel Hill men’s basketball team has finished the regular season, won the ACC Tournament and is now setting its sights on a very different experience: March Madness.

Dr. David Barrow and Cindy Hynes, who both work at the UNC-Chapel Hill School of Dentistry, also are preparing to enjoy basketball in another way – relaxing in front of their television sets, instead of standing at alert attention in their roles as ushers at the Dean E. Smith Center.

Ushering is a time-intensive role. The ushers who work during basketball season, numbering around 130, are expected to staff every home game, barring an emergency or other pressing commitment. When home games occur on a week night, Barrow and Hynes work a full day at the School of Dentistry and then arrive two hours before the basketball game for a meeting and other instructions. When the game has a 9 p.m. tip-off, the ushers may not arrive at home until after midnight.

And it requires a level of vigilance throughout the game. Both preside over a section of between 300 and 360 people, and their duties are as diverse as helping older people navigate the steps, checking tickets and directing patrons to their seats, keeping the aisles clear and monitoring the activity in their sections during the game.

They describe their volunteer service as an honor and a privilege.

“It’s like you’re throwing a party,” said Barrow, lab manager within the Center for Oral and Systemic Diseases and director of the GCRC Bioanalytical Core Labs. “You’re the host, and you want to make sure people are enjoying themselves. You want to be kind and courteous but make sure people are following the proper university rules. We try to protect all of the fans. I’m a safety manager, just like I am at the dental school.”

Barrow received the 2006 Marvin L. Poythress Service Award, given in honor of exemplary ushering service. He said Hynes, who also has been honored for her ushering service, piqued his interest in ushering three years ago. Hynes, an assistant in the Department of Endodontics, has just finished her 18th year of ushering service. Both also usher at the home football games at Kenan Memorial Stadium.

“The ironic part was that I was never into college sports [before ushering],” she said. “I was not even interested until I started working for the dental school. When I started working in the faculty practice, the Tar Heel Temp in the office was an usher. I thought it sounded like fun.”

For Barrow, who grew up in Chapel Hill, the love of Carolina basketball came early. He remembers Coach Frank McGuire and his blue-and-white Cadillac and pickup games featuring Walter Davis and Charles Scott in Woollen Gym.

Though she came to college sports a bit later than Barrow, Hynes also is “blue-and-white” through-and-through.

“I don’t watch anyone else but Carolina play, and I don’t root for anyone else,” she said.